This bento tasted like accomplishment because I successfully made my first egg white omelet today! I really intended to make my scrambled egg whites with spinach and prepared everything as usual, but the mixture started to cook on the bottom in a perfect little circle. I realized I had turned the heat down just enough to cook the eggs and not make it smell like I was trying to fry them into oblivion. I gingerly lifted one side of the mass to meet the other edge and nothing broke! Hooray for accidents!

I put it on top of my sautéed green beans (that are less visible because of the green bento box). On the right is a cut up juicy little Georgia peach with plain Greek yogurt that I mixed with a packet of Splenda, almond extract, and slivered almonds. One of these days I will try to mix in stevia since I know it’s probably healthier and I get a lot of winces when I mention that I use Splenda. Until then my philosophy is “Everything in moderation,” or whatever the latest excuse is:)

Sometimes you just need a big salad. Inspired by watching nothing but Seinfeld this week (my boyfriend and I have two seasons left, I believe), I decided to just have a big salad like Elaine for my lunch. I made a chicken taco salad and the only thing that makes it remotely taco related is guacamole as a dressing! I used up my baby spinach, added some rotisserie chicken, cucumber, cheese, and Trader Joe’s Reduced Guilt Guacamole (it’s made partially with Greek yogurt). It was delicious and filling! 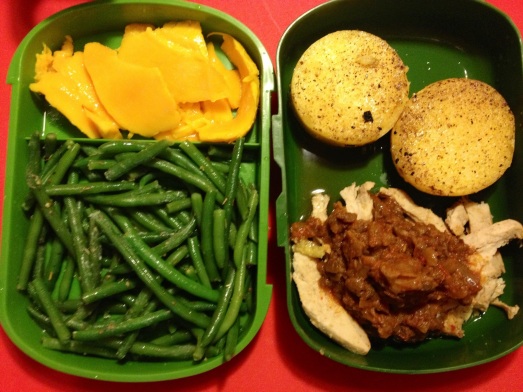 I ran out of money and subsequently regular food for this bento. Thus I had to excavate through the freezer to find some edible protein. I found some Gardein chick’n strips that I bought MONTHS ago at Kroger at a decent discount that I threw in the freezer for just such occasion. I threw some Trader Joe’s Eggplant Punjab on top to give it more flavor and it turned out to be tastier than I expected. I don’t think I will repeat it but it was enjoyable out of necessity.

Above it is some polenta that I pan fried and seasoned with salt and pepper. To the left is some mango I cut up while frying the polenta, nearly torching my apartment to the ground. It was all smoke and no flames, but enough to make me panic and double check the burners and even the oven (which I didn’t use at all).

And, of course, there are green beans that I sautéed in coconut oil with rosemary seasoning below the mango. They are my go-to vegetable choice!

For the past few weeks, I have actually just been bringing a small bowl of oatmeal with me to work because it is super convenient. But sadly it doesn’t always fill me up and is sometimes not appetizing enough to eat. When I make that oatmeal, I use the BSN Cinnamon Roll Protein Powder mixed with some almond milk. It’s rather gelatinous but pretty tasty if mixed well.

For this oatmeal I just mixed in some vanilla extract and a Splenda packet. There was also a fried banana recipe that is floating around Pinterest lately that I used. It calls for honey, which I did not have, but I just fried them in spray coconut oil and added some cinnamon. It turned out pretty tasty. To the right are sautéed green beans and avocado.

The 2.5 donuts that I consumed after this, however, were completely unnecessary and negated all healthy eating habits for the rest of the day.